Brazilian students had the opportunity of learning about the most significant bridges of Budapest from structural point of view through a ship-trip.

Within the framework of the Science Without Borders scholarship program, more than one hundred students are studying at the Faculty of Civil Engineering of Budapest University of Technology and Economics (BME). An important part of their education is to learn about the practical aspects of the theoretical knowledge they have been taught (during the semester) and to get to know the old and new achievements of the Hungarian civil engineering community. For this purpose, a series of programs have been organized for the engineers. During of the first and second event, the students could see the chain-chambers of Széchenyi Chain Bridge under the ground-level and couldvisit theinside of thesteel structure of Rákóczi Bridge. In both cases, expert guide was provided introducing the structures and their history. 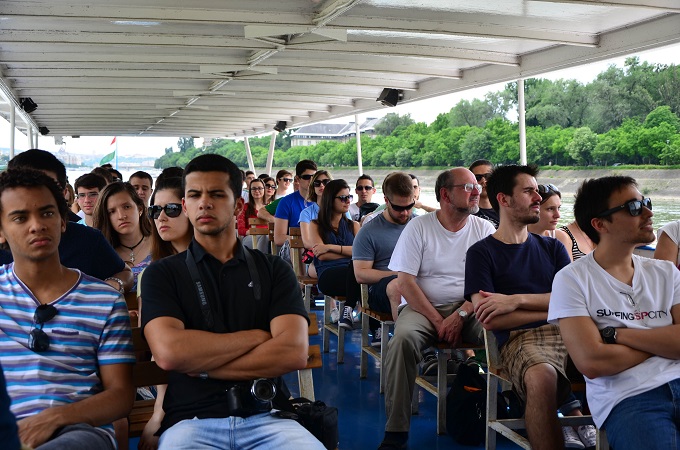 The third program was a pleasant ship- trip on the Danube at the end of May, where the civil engineers could learn about the history and structural configuration of the most significant bridges in Budapest. The trip has departed fromthe PetőfiBridge, the last visited bridge was the North Rail Bridge at Népsziget. Different configurations of bridge structures have been introduced during the trip e.g.: Gerber truss bridge, suspension bridge, arch bridge, I-girder and box girder bridge. The expert guide speech was provided by Prof.László Dunai, Head of the Structural Engineering Department. 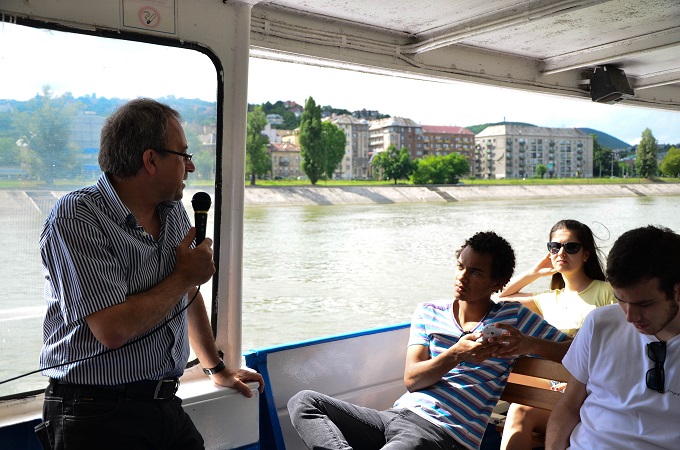 The students could learn interesting facts from the bridges such as that the Liberty Bridge is the first bridge over the Danube which was designed completely by Hungarian engineers.The bridge looks like a suspension bridge but its structure is a steel truss Gerber girder. Due to aesthetical reasons, the main girders do not follow the shape of the moment diagram between the hinges inside the main span; the structural height lessens rather than increases.

The adequate resistance of the structure was ensured with the thickening of the flanges. In 2007 the bridge has been reconstructed (in which the Department of Structural Engineering also contributed). The original reinforced concrete deck was changed to a composite structure, i.e. the connection has been ensured between the new reinforced concrete slab and the girders by means of studs. 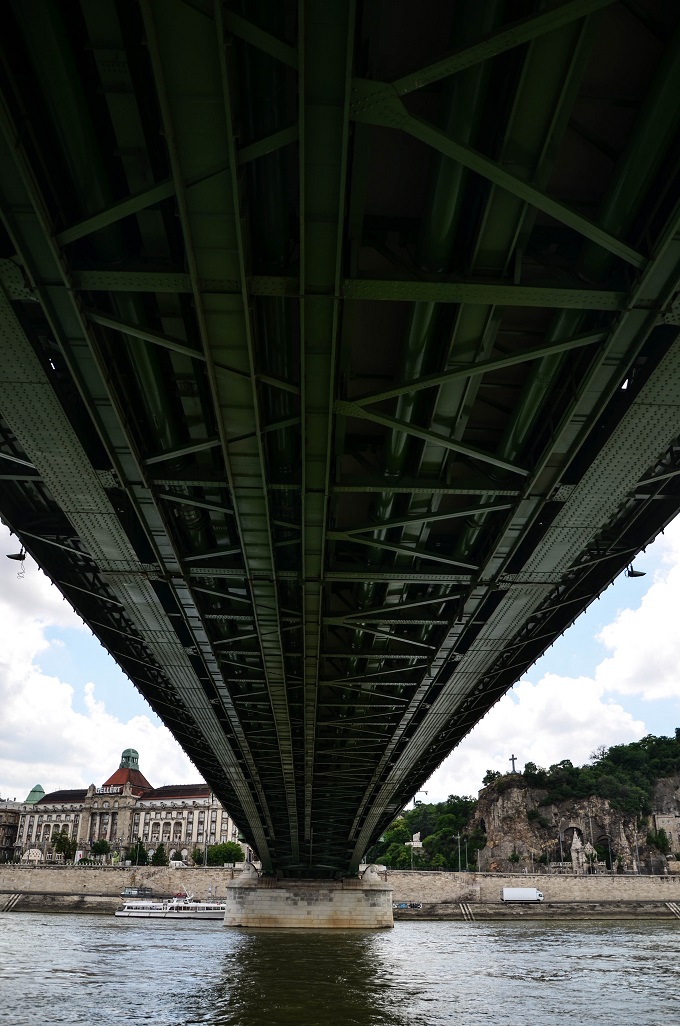 The following structure was the Elisabeth Bridge which was originally a chain bridge, with the longest span among the chain structures spanning over rivers. The bridge hold this title for 25 years, until another bridge built in Brazil overtook it. Before the construction, JózsefBeke engineer conducted experiments to find the most economic size for chains. The bridge has been destroyed during the Second World War.Because of economic considerations it was reconstructed as a suspension bridge maintaining the original shape of the chain bridge. 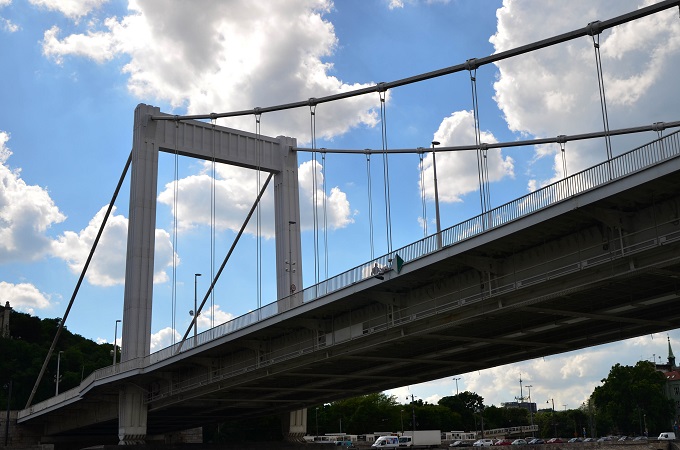 The next stop on the trip was the oldest bridge in Budapest, the Széchenyi Chain Bridge (built in 1849),. This bridge was the first link between the two separate cities (Pest and Buda), the erection of this structure opened the possibility  tounite them. The original stiffening girder was soft and the traffic capacity did not meet the requirements of the 20th century, thus the bridge has been strengthened and widenedin 1914. 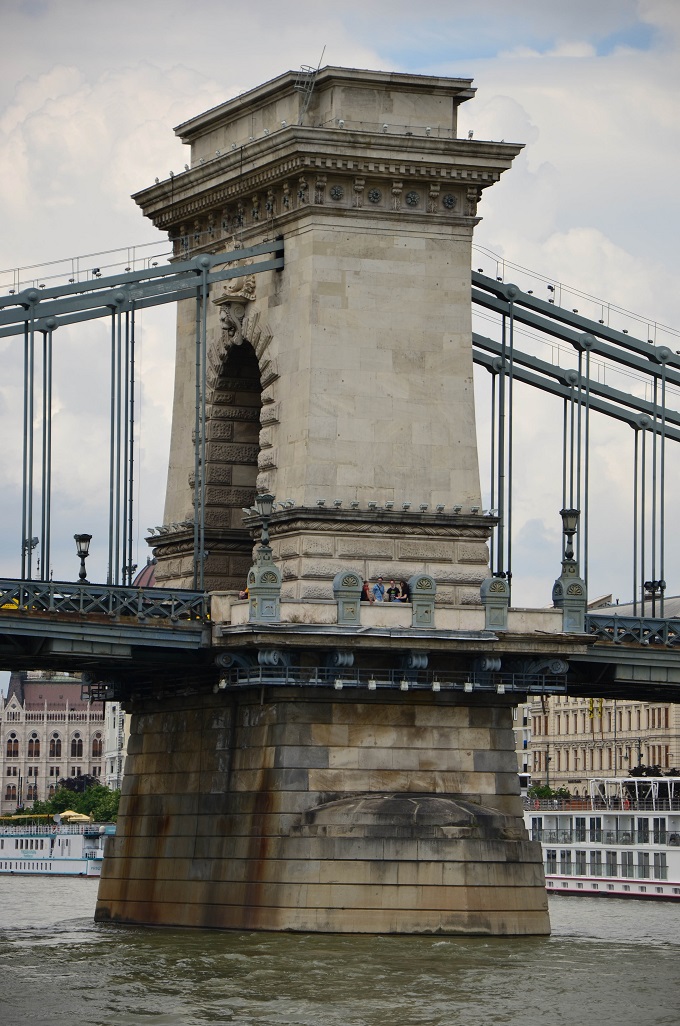 Passing under the Margaret Bridge, the students could survey the structural system of the bridge, which consists of 6 independent two-hinged arcs. The staff of the Department of Structural Engineering was involved in the load testing after the renovation of the bridge in 2011.The students learnt from the guide speech, that the tunnel in the bottom of the central pillar has hydrodynamic purposes;with that tunnel the erosion under the abutment is obstructed. 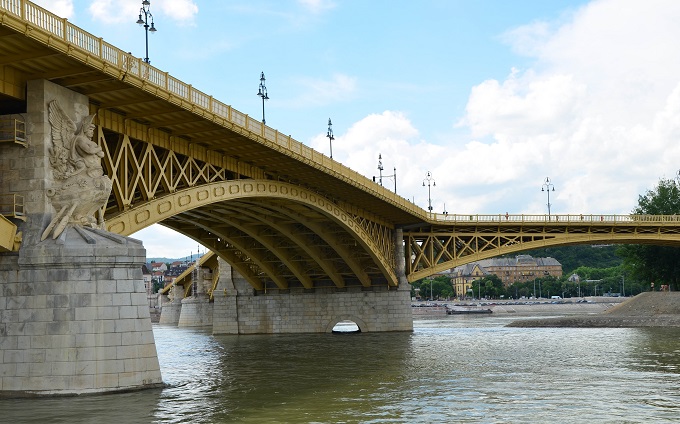 The only Danube bridgewhich was not destroyed in the Second World War is the Árpád Bridge, because this had not been finished before the war. After finishing the construction in the 50-ies the bridge waswidened; it currently consists of three independent, parallel bridge structures. The older structure is riveted, while the newer ones are welded withbolted connections. 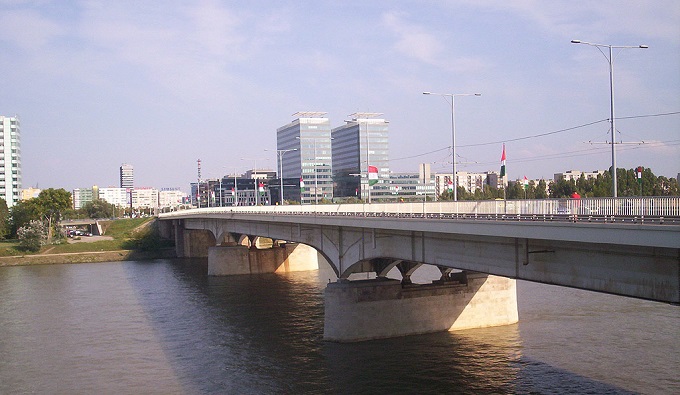 The last stop on the boat trip was at the Népsziget, where the North Rail Bridge is located. This structure is a truss bridge in which the bottom chord is the deck. Next to the bridge, the biggest Hungarian barge-derricklied at anchor. With it’s huge, 200 tons maximum capacity, this crane assisted a number of major bridge construction over the Danube, such as the Megyeri Bridge and the North Rail Bridge. 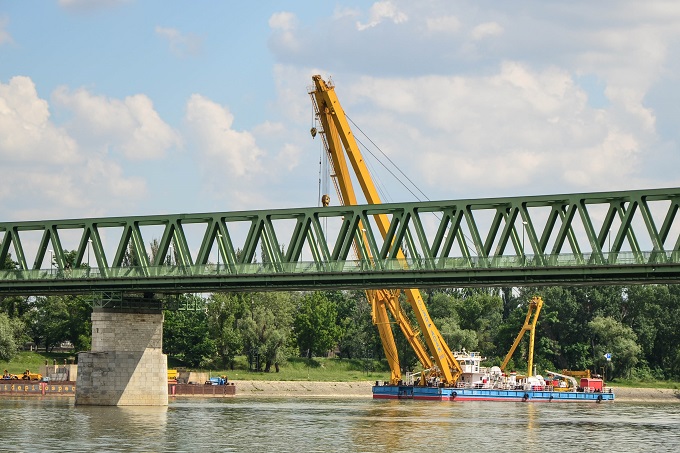 On the two-hour cruise Hungarian students of the Faculty of Civil Engineering also participated with the assistance of the Szilárd Zielinski Civil Engineering Collage.
The civil engineering students enjoyed the trip,based on the feedbacks. After the guide speech more people turned to the lecturer with questions. The Brazilian students can use their fresh experience in the summer, because in August a bridge builder contest will be held specifically for them. The results will be reported also at our site: epito.bme.hu.