Water level oscillations on the shores of Lake Balaton

In lakes, littoral habitats, marinas and beaches are adapted to wind induced surface oscillations. These oscillations range from long fluctuations (with a period of up to several hours) to short waves that can break as they approach the shallow zones; they contribute to the flushing of water in harbours and reed, and to the diversity of life conditions in mild-sloped littoral flats. Coupled with high mean water level, however, these oscillations may cause flooding of property. A useful mathematical tool to describe the wide range of oscillations that can be superimposed at the same time during a windstorm is spectral analysis. It breaks down the water level time series into wave components with different strength and period.

The little figure below gives an idea about the character of the lake surface motion recorded at two opposite ends of elongated Lake Balaton. The water levels on the eastern end (blue) dipped, whereas they rose slightly the westernmost point (red). A careful eye will even notice that the short oscillations have a different characteristic period, they are somewhat shorter in the red curve than in the blue. This can be explained by the distance between the shorelines and the variability of the water depth. 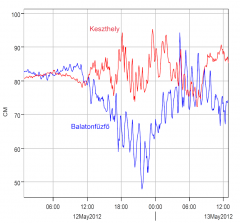 The research can go into many directions and can accommodate several students working on subtopics, depending on the level and interest of the students:

Several software will be used, including Matlab, QGIS, HEC-RAS.

Observations and modeling of the surface seiches of Lake Tahoe, USA