The opportunity of telling his career story was given to Dr. Imre Bojtár professor of the Department of Structural Mechanics by Dr. László Horváth.

So far you could read different kind of stories, someone has chosen Civil Engineering due to a friend’s encouragement, or a parental sample, or an unsuccessful high school entrance exam led others to civil engineering career. Dr. Imre Bojtár’s professional choice was influenced by computers. He always has chosen the way within the profession, where he had the opportunity to deal with programming: 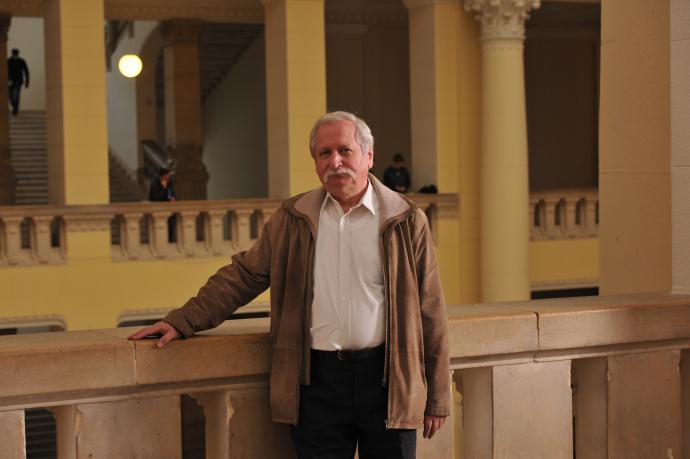 “Basically I have been a civil engineer due to the impact of my family. Both my mother and my father family connected somehow to the construction industry, for example masons, carpenters or architects. They worked and work in different fields of construction industry, so I could follow them. It was natural, that they guide me to this way, and I was interested in civil engineering when I was young, so my career choice was clear. I was already interested in mathematics and physics in high school, for example the behavior of different constructions. These things engaged me more, than playing with lights or space, which would be necessary for being an architect. I was too practical-minded for that. I felt civil engineering problemsolvings more fitting. As a university student I found each faculties very interesting and exciting, and I have never felt that there is a hierarchic difference between them. I had two reasons, why I chose the Department of Structural Mechanics: first, my interest was bigger in the tasks of this department, and I was really interested computer problemsolving and programming. This department had subjects related to computer technology since the end of sixties, and it enchanted me. Ever since computers became the part of everyday life, and now we plan and analyze a construction or a material in a totally different way. These changes were so big, that renewing our tools was not enough, we had to change the way we think – and not only in our profession, but also in everyday life. The phone which records this conversation, did not exist in this form 20-30 years ago. Nowadays if you get on the metro, you can see that 80% of the passengers travel with a phone in their hands, and many of them use their phones for work, not for fun. If I were a little bit philosophical, I would say that in the close future the forthcoming artificial intelligence will make more extraordinary impact on every aspect of life. I’m connected to this topic a little, because of my family, two of my daughters are to-be mechanical engineers, both deal with mechatronic robot design. Returning to the training, I had a connection with many academic departments, especially with the onetime Department of Reinforced Concrete Structures, and I took part in several industrial works and researches, mostly in the part of computer-programming. The reason, why I chose this as a teacher, is also thanks to the computers. Here they offered me preliminary programming tasks that I found specifically exciting, and this enchanted my soul. I did not want and could not resist to it, so that is how my university career began. The freedom of thought is the biggest charm of the university work, which usually allows to choose the topics of research. In our department the spectrum is particularly wide, because many tasks have mechanical attachment. These exciting and variable tasks makes it easy and pleasant the passing of knowledge to the interested students. I really love teaching, mostly in smaller groups. Understanding the phenomena of the world, and transferring this gives me a very strong attachment to the university work. I think engineering work is also inspiring, and not only the planning part, but nicely done constructing as well.”

We asked Dr. Imre Bojtár choose someone among his colleagues, who will tell his/her career starting story. Imre have chosen Dr. Ákos Török, so his story is coming soon.