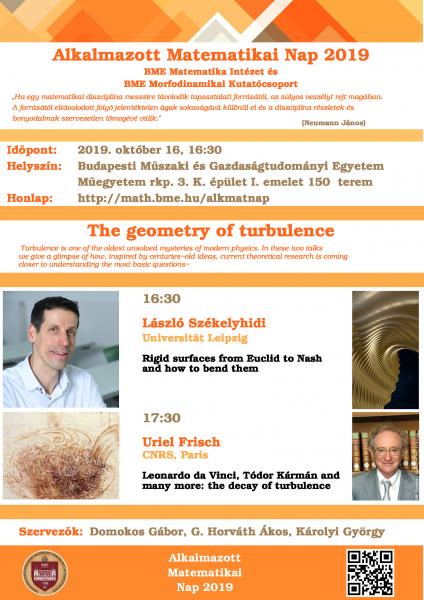 Rigid surfaces from Euclid to Nash and how to bend them.

Összefoglaló:
A compact surface is called rigid if the only length-preserving
transformations of it are congruencies of the ambient space - in simple
terms rigid surfaces are unbendable. Rigidity is a topic which is already
found in Euclid's Elements. Leonhard Euler conjectured in 1766 that every
smooth compact surface is rigid. The young Augustin Cauchy found a proof
in 1813 for convex polyhedra, but it took another 100 years until a proof
for smooth convex surfaces appeared. Whilst it seems clear that convexity,
and more generally curvature plays an important role for rigidity, it came
as a shock to the world of geometry when John Nash showed in 1954 that every
surface can be bent in an essentially arbitrary, albeit non-convex manner.
The proof of Nash involves a highly intricate  fractal-like construction,
that has in recent years found applications in many different branches of
applied mathematics, such as the theory of solid-solid phase transitions
and hydrodynamical turbulence. The talk will provide an overview of this
fascinating subject and present the most recent developments.

Leonardo da Vinci, Tódor Kármán and many more: the decay of turbulence

Leonardo had a strong interest in mathematics (at the time, mostly geometry
and simple algebraic equations). In the early part of his life, spent in
Florence, Leonardo became interested in chaotic hydrodynamics (called by
him, for the first time "turbulence"), a topic which will persist throughout
his life. Examining the "turbulences" (eddies) in the river Arno he found in
the late 1470 that the amplitude of the turbulence was decreasing very
slowly in time, until it would come to rest (within the surrounding river).
This topic would remain dormant for close to 5 centuries, until in 1938
Tódór (Theodore) Kármán, triggered by Geoffrey Taylor, established that
the amplitude of the turbulence should decrease very slowly, indeed like
an inverse power of the time elapsed. Three years later, Andrei Kolmogorov
found an algebraic mistake in Kármán's calculation; Kolmogorov himself found
another inverse power (5/7) of the time elapsed. This, likewise was wrong.
In the talk we will present developments in a historical context and connect
to recent progress on this topic. Very recently, we found that the law of
decay of the amplitude need not be exactly an inverse of the time elapsed.
Furthermore, more exotic laws of decay were obtained for "weak"
(distributional) solutions using a Nash-like construction.